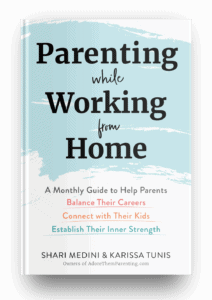 GO HERE for the Book 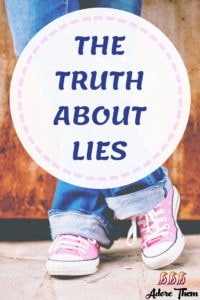 Are you ever completely baffled by your kids? Like you don’t understand why they’re acting in a certain way? The one that always gets me is lying. I catch him lying, he knows he’s lying, he knows I know he’s lying…and he lies anyway. And keeps doing it. What is that? Read below to learn the truth about lies.

This article is written by Dana Baker
For more on this topic, check out the full Child Behavior & All About Teens collections

Is lying part of normal development?

As annoying, confusing and even hurtful as being lied to is, it’s actually part of a child’s normal development. In fact, some researchers think that a child’s first lie is a positive milestone in mental growth. That’s not to say we want to encourage it, but you should expect to run into it along the parenting road–and not just with little kids, but also with teens as they mature (oh so slowly sometimes).

Research conducted by Dr. Nancy Darling of Penn State University found that over 96% of teenagers lie. They lie about many things. Some are understandable, others not so much. My pet peeve was homework. This was a huge point of contention with my son. He’d say he did it but the teacher lost it; or he did it and didn’t turn it in; or his dog ate it. (And no, we did not have a dog back then!)

According to research, the most frequent lies teenagers tell are about drinking, drugs, whether a party is being supervised and riding with a drunk teen. Those are obviously critically important lies, but kids also lie about what they spend their allowance on, whether or not they are dating, even what they had for lunch. I mean hello? Why would they lie about that?

Why do Kids lie?

Avoiding a lecture or fear of punishment is the most basic reason. If your teenager knows they have done something wrong and they want to avoid the consequences, one easy option is to lie. At times this will be calculated and elaborate, other times it will be instinctual and they’ll make it up on the spot. Sometimes they even think they are protecting you – and although it may not feel that way to you, most teenagers still value their parent’s opinion and want their approval. Not wanting to let parents down can be another motivation to lie.

It’s important as we navigate this road to remember that our kid’s job is to detach. Teens are trying to carve out space for themselves, to separate from you and figure out their own identity. Their journey to freedom sometimes propels them to lie. If they feel that what they are doing is out of sync with your values or morals, lying may be their first reaction; that way they can avoid disappointing you.

However, what seems like a simple solution in that moment may prove to be more problematic over time. The “easy way out” turns out to be extremely expensive, particularly for teenagers who have gotten so deeply into lying that they feel trapped in a world of dishonesty, a world of their own fabrication. They don’t understand that telling outright lies or lies of omission erodes your trust in them. And as your trust erodes, so does their freedom. It’s really hard to give them room to grow and become more independent when they are being dishonest with you.

What’s Behind the Lie?

Sometimes their lies are not about you at all. During the teen years kids shift from being family focused to friend-focused. While this can be painful for us, it’s super important to them. Your kid may exaggerate her achievements, make stuff up and generally present herself as a person you don’t even recognize. Teens have a lot invested in their social status which can become more important to them than telling the truth. Having the courage and smarts to deceive or manipulate us can earn them respect and esteem in their peer group. It’s that anti-authority, us-versus-them mentality; clever teenagers, gullible adults.

A lie can also be a cry for attention–even affection. It may be unconscious, but that doesn’t make it less true. That’s when they may steal a candy bar and eat it in front of you, or even lie about something bad happening. They do it to get a reaction, to get affection or to somehow build themselves up. They push to find boundaries. The boundaries they hate are also the ones that make them feel cared for. What do you do when you realize your kid is lying to you, and she’s doing it more and more often?

How To Respond to Your Child’s Lies

The first thing to do is take a deep breath–maybe several. Go for a walk if you have to. Obviously, losing your temper is just a fact of parenting – I can’t tell you how many times my head has spun around like something out of The Exorcist. But that doesn’t usually end well for any of us. So try to hold on and express your thoughts about the importance of honesty, calmly.

Kids get more secretive, defensive and stubborn when we interrogate them. Instead, try connecting. It may sound counter intuitive when you’re boiling mad, but the safer you make her feel, the less she will feel compelled to lie. To avoid questions and to keep from being found out, liars often become isolated from family and friends whom they have deliberately misled. Liars distance themselves from those they care about and love.

We want our kids to trust us, to come to us if they are ever in trouble; not to feel alone and out of control so encourage honesty, and praise it when it happens. Tell her a story of a time you lied and it backfired, or remind her of a time it backfired on her. Or share a positive story of something good that came out of being honest, even when it was hard.

Negotiating rules and boundaries is one of the most effective ways to reduce both conflict and dishonesty. One of the reasons teenagers lie is because they think we won’t listen to them. If they believe that the rules are unfair and there is no room to negotiate or to make exceptions, then in their minds, dishonesty is the only choice. But if we give them a bit more freedom they often step up their game.

So when your teen wants a later curfew or an exception to some rule, listen to him. Try to understand what is important for them in this instance. What is at stake for them? Then think about what is at stake for you and see if you can find a compromise. Obviously we can’t always do that, but if there is never any room for negotiation then they believe there’s no point asking, so they won’t. They will just resort to lying.

If, on the other hand, your child isn’t asking for anything and isn’t lying to keep out of trouble, dig a little deeper to find out what’s going on. Try saying, “I notice that you lied but I don’t get it. When I asked if you ate your lunch and you said ‘yes’ but it’s right here in your backpack. It’s not like I’d be mad if you’d told the truth. So why didn’t you?”

It takes a lot of energy, attention, and effort to lie continuously. It’s nerve-wracking and stressful to worry about getting caught–or to remember what you’ve told to whom. Chances are good that while they may be embarrassed or angry at being caught, they will also be relieved, although they will never admit it.

Don’t expect a great answer to why they lied about something inconsequential–in fact I’d often get a shrug and maybe a grunt. But if you can acknowledge the lie without lecturing, you’re telling your child that being dishonest won’t get them what they want; that personal integrity matters. They’ll also realize that while you know they lied you’re not making a huge deal of it and maybe the next time they’re tempted to lie, they won’t bother.

Really listening–even to the silence, helps. Silence often means something’s churning in there. See if you can find out what it is. Notice what the lie is about. Can you extrapolate anything from that? Is your teen going through a rough patch with friends, grades or even with your spouse? Take some time to understand her thoughts and feelings. My kids share the most at night when they are tired and going to bed. Figure out when your kids are most open and try chatting then.

Sometimes a teen’s dishonesty reflects our ability to communicate openly. It sounds great to have totally open and honest communication with our teens, but be sure you are ready. Really ready. What if your teenager wants to tell you that he drinks at parties? What if he asks to have a party while you are home? Or your daughter wants to go on birth control or you find condoms in your son’s room? If you can’t handle having those up front, honest and difficult conversations, you can’t expect your teens to be honest with you. It just doesn’t work that way.

Sounds simple; but it’s not easy. And that’s the truth about lies.

For more on this topic, check out the full Child Behavior & All About Teens collections 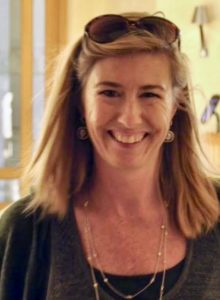 Dana Baker is a writer, editor, not-so-perfect mom of two, and a Parent and Teen Coach. She help families reconnect and find a way around the walls that cause such isolation and dysfunction in these years. Dana offers advice from the trenches, a non-judgmental ear and tips/feedback based on the science of psychology and the reality of parenting. Read her blog and follow her on social media. 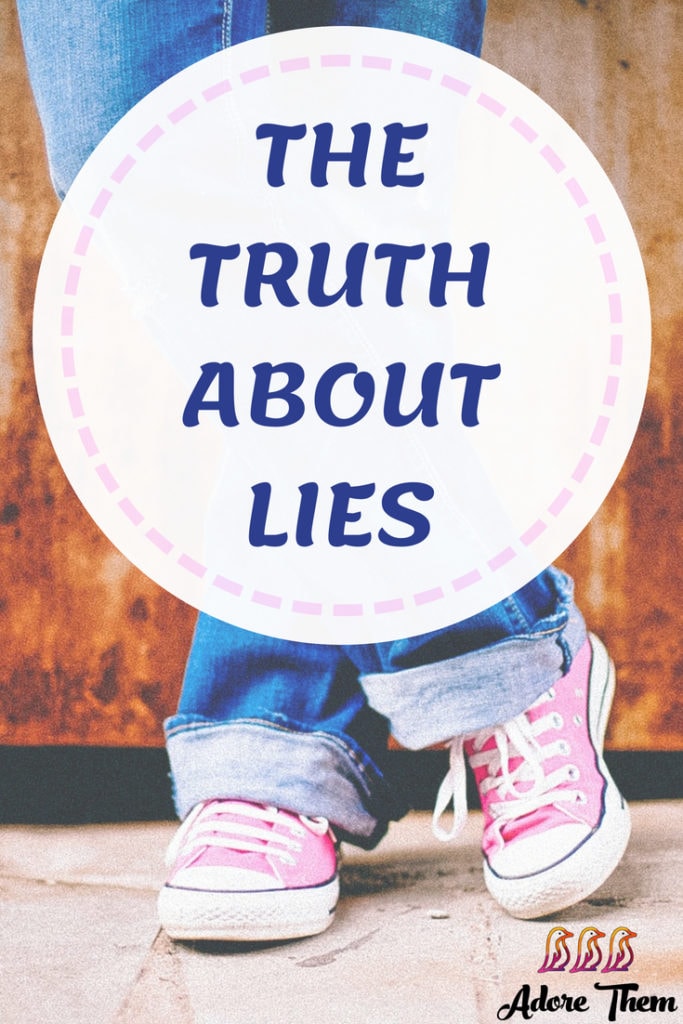 GO HERE for the Book

We use cookies on our website to give you the most relevant experience by remembering your preferences and repeat visits. By clicking “Accept”, you consent to the use of ALL the cookies.
Cookie settingsCLOSE and ACCEPT
Manage consent

This website uses cookies to improve your experience while you navigate through the website. Out of these, the cookies that are categorized as necessary are stored on your browser as they are essential for the working of basic functionalities of the website. We also use third-party cookies that help us analyze and understand how you use this website. These cookies will be stored in your browser only with your consent. You also have the option to opt-out of these cookies. But opting out of some of these cookies may affect your browsing experience.
Necessary Always Enabled

Any cookies that may not be particularly necessary for the website to function and is used specifically to collect user personal data via analytics, ads, other embedded contents are termed as non-necessary cookies. It is mandatory to procure user consent prior to running these cookies on your website.

How to Connect With Your Teen – From a Teen’s Perspective